These Pellets Here This Powder There
36 Orchard Street

On Fridays We Have Half Days

Blake Rayne’s paintings are structured by the generative duplicity of words like script, folder, application, dissolve, and screen. These operative terms locate the work between structures of linguistic description and the history of reflexive material procedures. Rayne begins from an orientation that would consider the terms ‘painter’ and ‘painting’ as signs—that is, as fictions. They have no stable material definition, but rather are shaped by linguistic, institutional, and physical relations. Rayne’s mode of abstract painting is irrevocably marked by conceptual art. Here, context is constitutive.

A cryptic accumulation of references culled from esoteric historical figures, archival images, literature, personal relationships, and network television are, in Rayne’s body of work, united under the structuring sign of cinema. Each exhibition is staged like a shot in a film, necessarily informed by and in dialogue with those that came before it. ‘Scripts’ drawn from film production that call for folding, spraying, stitching, and looping govern the work’s material formation. The patterns that appear on its surface always have a relationship to the structure of the pictorial support.

For The Disappearance of Red Pistachio Shells / The Dawn of the Californian Nut Industry (1979) (2007), a loop of canvas was acted upon with protective films, rollers, and spray paint, then cut and stitched into individual works. In Dust of Suns (2008), Rayne deployed the cut alongside the fold, this time hanging canvases alongside their corresponding crates in what amounted to a spatial ‘trailer’ for a future film. This dialectic between the word and the painterly gesture was again taken up in Folder and Application (2010), which overlaid white monochrome canvases with projected text and a cascading felt letter ‘a’; the exhibition staged a job ‘application’ for the position of painter. On Fridays We Have Half Days (2014) recast aspects of the movie theater apparatus—box office, concession stand, projection booth—within the space of the gallery: paintings functioned as ‘posters’ and promotional tools and a stop-motion digital ‘trailer’ projected them in miniature on live bacterial culture. In 2018, Rayne initiated a series of four exhibitions beginning with DOGSKULLDOGS at Miguel Abreu Gallery, centered around painted appropriations of famous Neanderthal skull remnants, engaging while simultaneously suspending the material realities of archeological, cultural and political history, linguistic reference, and the expressivity of painting within an individual art object.

Blake Rayne continually engages the history of painting as a field of tensions that compose the practice of painting as cultural sign. He attempts to work through the need for historical competence in understanding the possible relevance of painting for both the painter’s level of self-consciousness and for forces of legitimation within a corporate culture of information. The sign ‘painting’ is on the one hand always compensatory for other cultural interests, at the same time that it also suggests a field of evasions and deflections, a material practice in which the artist is constantly displaced by language while being administered by institutional demands for certain types of artistic subjects: whether the latter be the hack enfant-terrible or the artist intent on legitimizing his/her endeavors with a trove of cultural reference.

Blake Rayne (b. 1969, Lewes, Delaware) lives and works in New York. He attended the California Institute of the Arts, received a fellowship from the American Acadamy in Berlin (2010), and has taught at Columbia University’s School of Visual Arts.

Tense and Spaced Out: Polar Nights, Glacial Chaos, and the Ecology of Misery, a monograph covering the last decade of the artist’s output, with texts by John Kelsey, David Lewis, Jaleh Mansoor, Laura Owens, Sean Paul, and Javier Sánchez Martínez, was published by Sequence Press/Blaffer Art Museum/Sternberg Press in 2017. Almanac, a collaboration with Three Star Books and Westreich/Wagner was published in 2013.

Rayne’s paintings are held in the collections of the Museum of Modern Art, the Whitney Museum of American Art, FRAC Poitou-Charentes, the Pinault Collection, the Portland Museum of Art and Institute of Contemporary Art, Miami. 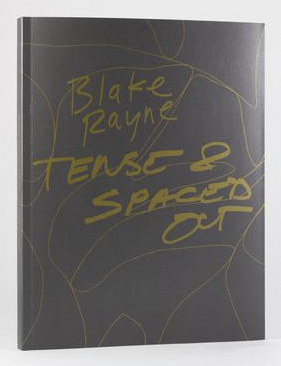