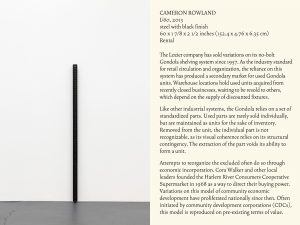 The Lozier company has sold variations on its no-bolt Gondola shelving system since 1957. As the industry standard for retail circulation and organization, the reliance on this system has produced a secondary market for used Gondola units. Warehouse locations hold used units acquired from recently closed businesses, waiting to be resold to others, which depend on the supply of discounted fixtures.
Like other industrial systems, the Gondola relies on a set of standardized parts. Used parts are rarely sold individually, but are maintained as units for the sake of inventory. Removed from the unit, the individual part is not recognizable, as its visual coherence relies on its structural contingency. The extraction of the part voids its ability to form a unit.
Attempts to reorganize the excluded often do so through economic incorporation. Cora Walker and other local leaders founded the Harlem River Consumers Cooperative Supermarket in 1968 as a way to direct their buying power. Variations on this model of community economic development have proliferated nationally since then. Often initiated by community development corporations (CDCs), this model is reproduced on pre-existing terms of value.